Rusch had been Quiel’s tax attorney. Eventually Rusch ran a scam on Quiel and in doing so implicated Quiel in tax violations which became criminal charges. Rusch then flagrantly lied on the witness stand when he testified against his client – Quiel. It was after Quiel’s trial that Rusch changed his name to Christian Reeves in order to continue his scams on others, unobstructed by his past, and perhaps promoted by his government handlers. 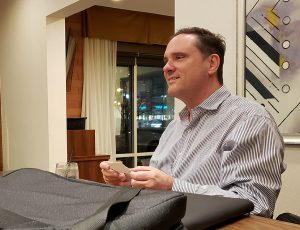 Resulting from our publication, which was disseminated world-wide, we received numerous calls to-date regarding Christopher Rusch aka Christian Reeves (Rusch/Reeves) and his continued criminal activities. One recent case involved a California businessman who had contracted with Reeves through Reeves’ company, Premier Offshore Inc., to provide him with an offshore trust for asset protection. We have decided to withhold the name of this victim of Reeves. We will refer to him in this article as “John”.

On December 23, 2019, John contacted Christian Reeves to set up his offshore trust for asset protection with Reeves’ Premier Offshore Inc. John had been intending to purchase property in Mexico and wanted to minimize his liabilities by setting it up in an offshore trust. When John first spoke with Reeves, he was not aware at the time that Reeves was a felon and had been disbarred as an attorney under his given name Christopher Rusch.

Initially, Reeves told John that the cost for setting up a trust with an offshore bank account would be $12,400.00. Half of the fee would be due up-front and the remainder due when the Trust and Bank account were set up and complete. Reeves told John the process would only take three weeks to complete. John complied and wired him $6,200.00 to start the process on December 26th, 2019.

After filling out numerous applications and forms, and sending bank documents and copies of his passport and his beneficiaries’ passport, more than three months had passed. John kept contacting Reeves, attempting to push the process along. Reeves in turn just kept stringing him along.

Then on February 28th, 2020, Reeves informed John that the trust was accepted. The next day Reeves sent John the Trust Deed to fill out and send back to his office – which had moved to Tijuana, Mexico from Carlsbad, CA. This put up a red flag in the back of John’s mind, especially when Reeves asked John to send him the remaining $6,200.00, which wasn’t due until completion of the trust, and the trust was not complete. The deed had not been sent to the fiduciary in the Cook Islands – ORA Fiduciary – that Reeves was supposedly using to provide the diligence, approve and register the trust.

At that point in time, John had nothing but Reeves’ verbal guarantee that his application was accepted. So, John decided to hold off from sending him any additional funds.

Two weeks passed after sending Reeves the Signed Trust Deed and filled-out application documents for Capital Security Bank, also located in the Cook Islands, and there was no communication from Reeves. Nor was there a response as to whether the bank had approved John’s application or not. After another week passed with no response, John took it upon himself to contact Capital Security Bank. They informed John that most of the documents Reeves had sent to them were incorrectly filled-out and would need to be corrected. They also wanted to see the proof of a registered Cook Island trust. So, John contacted ORA Fiduciary and communicated with a representative, Ms. Teria Boaza. Ms. Boaza informed John that they never received the deed from Reeves, and they never received payment for the invoice for services rendered by them in regard to the diligence and processing they did on John’s trust. John asked Ms. Boaza if her firm had ever worked with Mr. Reeves before and she confirmed this was the first time that they had.

At this juncture, John became genuinely concerned. He began to look through some of the documents that Reeves had sent to him early on. John noticed that the initial draft of the Trust Deed did not have ORA Fiduciary listed, but a comparable firm located in New Zealand, SouthPac Group. John called them and asked if they had any information on Premier Offshore or its sole operator, Christian Reeves. SouthPac Group representatives informed John that Christian Reeves was really Christopher Rusch, and that he had been blacklisted by their firm for fraud on other trust applicants.

After doing further research on the internet regarding Rusch/Reeves, John found fraudulent activities in the past perpetrated by Rusch/Reeves on other unsuspecting people.

John then reached out to Reeves and asked for his money back – no response. Then, he informed Reeves that he was going to report him to the FBI. Finally, he replied – faster than he ever had before – throwing out several excuses as to why he hadn’t responded immediately. Reeves informed John the Trust was complete and John needed to compensate him with the rest of the money before he would send ORA Fiduciary the signed copy of the deed. When John asked why Reeves hadn’t paid them their fees, he said he does that after getting the remaining fees due and reminded John that he hadn’t paid that yet. When John asked him about the bank account not being approved, Reeves said that was in process and would be finished once he received the remainder of his fees from John. It was amazing to John how everything was contingent upon his paying Reeves more money. However, this is not what Reeves and John had initially agreed upon. For extra measure, Reeves also threw-in the lame excuse that the COVID – 19 lock-down had kept him from contacting John – simply another lie from a very crooked Rusch/Reeves.

John, finally having had enough, reported Reeves to the FBI on April 7, 2020. He hasn’t had any response from them to date.

Rusch/Reeves owes John $6,200.00 and the US~Observer will pursue Reeves until John is paid back in-full, plus any additional funds for all of the measures that John has been forced to take due to Reeves’ obvious Fraud. We will also pursue this criminal until the false criminal conviction of Michael Quiel is vacated and totally expunged.

Christopher Rusch aka Christian Reeves was in the custody of the federal government prior to Michael Quiel’s trial. The deal he cut to receive favored treatment included future get-out-of-jail-free cards. It was this simple; become a snitch for us, commit perjury in order to allow us to get a conviction against Quiel and we will give you your passport back as soon as you are released from your very short prison term and you can immediately travel out of country and scam innocent people at will.

Had the Department of Justice (DOJ) and the Internal Revenue Service (IRS) actually been seeking justice during that case, they would have treated the evidence for what it was; Rusch, a con man posing as an attorney, financially raping his client and setting him up for the fall. Instead, the DOJ and IRS conspired to commit fraud upon the court and much more. Had they pursued justice they would have kept an untold amount of people from getting scammed, including John, and even more importantly the court.

At this juncture it would be extremely wise for US Attorney Michael Bailey to instruct the IRS agent and the Assistant US Attorney involved in the Quiel case to sit down, discuss the Quiel case and then make the decision to vacate his criminal conviction in the interest of justice. Bailey should also instruct the FBI to conduct a thorough investigation into the recent case involving Reeves’ crimes against John – they can contact the US~Observer to obtain John’s real name and his contact information. Anything short of these actions and the US~Observer will turn all of the individuals involved into household names, not only in Phoenix, Arizona but throughout the country.

Have you or anyone you know been scammed by Christopher Rusch or Christian Reeves? We want to know. Call Edward Snook at 541-474-7885 or email him at editor@usobserver.com.

This article was written by Edward Snook, Editor-in-Chief of the US~Observer.